A possibility for professionals?

Can Apple Music be used in a restaurant, bar, store?

It is tempting to use Apple Music© in your store, restaurant, or bar... The advantages of the apple brand solution are many, let's examine them one by one.

First, the number of songs.

The Apple website© tells us "Listen to 50 million songs in commercial-free streaming". 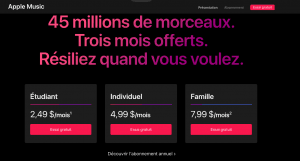 Well, that's on the French site, on the international version of the site (price in dollars), we indicate 45 million songs. 45, 50, it's true that it's a difference of 5 million songs, so all this is a bit approximate... Actually, we have no way of knowing how many songs there are at Apple Music©.

But is the number of titles that important? If you consider that a song is on average 3 minutes 30 minutes long, it means that you listen to about 17.14 songs per hour, so if your store, café or restaurant stays open 20 hours a day (which is rare) you will have to play 343 songs a day, you are open every day of the year, without ever taking a vacation... OK. So you will have to play 125,000 songs per year.

Of course, some songs will be played several times: the hits, the titles that correspond to the precise atmosphere you want in your store, so in practice, even with such long working hours, you will never need 125,000 different titles, but for the joy of calculation, let's assume that all the titles must be different. how many years to play 1 million different titles? the calculation is simple. 7.98 years, say 8 years to round up.

From that point on, can we say that with Apple Music© you will be able to listen to 50 million songs in streaming without advertising? no, of course not, unless you listen to 10,000 tracks at the same time.

To summarize, the number of titles in millions is not an argument.

The reality is that few businesses broadcast music more than 10 hours a day,  or 171 shares.

Few businesses are open more than 6 days a week, and 6 days give  1026 titles per week.

A good part of these tracks are the same from one week to the next, let's say at least 30% because otherwise your establishment will never have a particular musical style, but just an ensemble of rock, hard-rock, bossa, metal, jazz, fusion, electro, dance, pop, lounge, latino, EDM etc. In short from one week to another from one month to the next you will find a lot of tracks that allow you to draw a musical atmosphere. 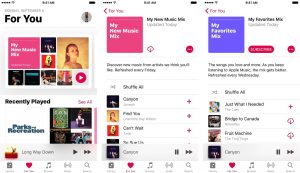 When you are connected to Apple Music©, you can either create your own playlists, which takes time and requires musical expertise, or use the playlists offered by the system, most of the time you will take this second option, because you have to hide it when you work in a store or a café, you don't really have time to play the DJs.

So is it really an advantage of the apple brand? Not so sure. Apple's playlists correspond to an atmosphere, but to know if it's the atmosphere you want in your establishment you'll have to listen to them. If it's not suitable, hop, you change. It's not very complicated, but it takes time. Theoretically you have something else to do than manage the music.  Professional music solutions for restaurants or shops offer playlists adapted to your profession, your business with a precise targeting on your customers... The playlists are made by themselves, it's still much more convenient.

Besides, the problem is that the system doesn't start itself, you have to turn on your ipad, ipod or computer, and trigger the playlists, change them etc. For some people it's not a problem, but the reality here again is that in a business you have better things to do than play the DJ.  Professional music environment systems such as Music Admix are automatically switched on during opening hours, and are automatically switched off when the point of sale closes.  So here the second advantage of the Californian brand is not actually one for a trade professional.

Wait a second... Student; individual, family... None of these three terms refers to the world of commerce, retail, catering... How is that possible?

To find the right page, you have to surf through a number of sections, but you end up doing it. https://www.apple.com/fr/legal/internet-services/itunes/fr/terms.html will give you all the necessary information.

Two elements should be noted:

1- You may use the services and content only for personal and non-commercial purposes.

2- Any other use of the services and content constitutes a serious breach of this contract.

And for good measure, let us add a third one, which can be found in the paragraph on intellectual property:

3- You agree that the Services (...) contain information and materials (...) that are protected by intellectual property and other laws, including, without limitation, copyright and related rights, and that you agree to use such protected information or materials only in connection with the use of the Services in accordance with the provisions of this Agreement, for personal and non-commercial purposes.

"for personal and non-commercial purposes."

This is quite clear: the use of the Apple Music© service is only allowed in a non-commercial personal context.

That's why the price is so low: music broadcasting in the family does not contain the musical rights that are due during a public broadcast; if you broadcast music in your business; your hotel, your gym, it's not a family farm and you have to pay the public broadcast rights.

But you are paying the SACEM!

This is where the question that we hear most often comes up" I already pay SACEM, why can't I use a service like Apple Music© ? »

The answer is in two parts.

First, because your contract with Apple© forbids it. The apple brand does not allow you to use the service for commercial purposes: from a legal point of view, there is no need to talk about SACEM or not: you sign a contract for personal use, that's all, no discussion, no dispute, if you use the solution in your establishment, you do not respect the contract, what can happen when you do not respect a contract? ask your lawyer. 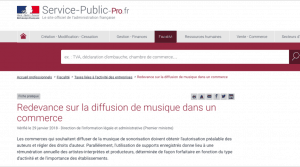 This is the second part, which we should not discuss as the first part seems obvious to us, for the pleasure of a little more legal reading, you can go to this page https://www.service-public.fr/professionnels-entreprises/vosdroits/F3094 that explains the principle of rights to you.  Let us quote the first paragraph"" Businesses wishing to broadcast sound music must obtain the prior authorization of the authors and pay copyright fees, while the use of recorded media gives rise to an annual remuneration for performers and producers, determined on a flat-rate basis according to the type of activity and size of the establishments. »

You will read on this page that" Sacem concludes a contract providing that in return for the fees paid, the operator may broadcast at will the repertoire managed by Sacem. «

The directory managed by Sacem. 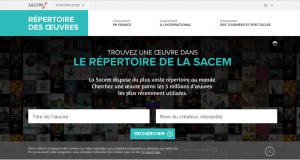 "What if I still play music without knowing if it belongs to the Sacem repertoire?

In short, people who use Apple Music are in breach of their contract with Apple, and in violation of the law, so our advice is simple: to avoid problems, don't make a mistake. professional ambient radio solution!